A downloadable Visual Novel for Windows, macOS, and Linux

Summer Horrordays is our entry to the 2021 Spooktober VN Game Jam hosted by the DevTalk Discord server. The game, including the trailer below, was made within the Ren'py game engine.

Relive the Summer holidays and go on a journey through 6 short stories spanning a single day.

Take a peek through rose tinted glasses, then rip away the curtain to see the monsters lurking beneath.

Don't forget to send us a postcard, have a nice trip...

For a full description of the words and images used in the trailer, please continue down the page.

The game is a horror game and as such contains scenes some people may find disturbing. There is a full content warning within the game, accessible through the main menu (click the polaroid image on the lower right). However it should be noted there is not explicit imagery of gore, and no sexual  content.

Summer Horrordays was created as an entry to the Spooktober Game Jam, and was made entirely within the month of September. The game is linear, with no choices that affect the story, and contains a collection of short stories. The concept is based on a poem written by Jenivere, [number redacted] years ago, which was heavily edited and adapted to make one of the stories. The other stories were based on the concept and style of the poem. The music, writing, art, gui, and many other features are entirely original and were made from scratch for this project. Sound effects were sourced from ZapSplat and FreeSounds, and have been edited and used under the relevant creative commons licences.

All assets, unless otherwise stated, are the property of PunderBash Games and the team who worked on them, and are not available to be used in other projects at this time.

Summer Horrordays has been adjusted to work with Ren'py's built-in self-voicing feature, which can be activated by pressing the V key on a keyboard. This uses the system voice included in your usual OS, and is not voice acting, however it does include image descriptions and image button descriptions which may not be picked up by screen reader software.

An accessibility menu can be brought up in-game by pressing Shift + A which will allow you to adjust the volume of the self-voicing.

There is also an option here to change the in-game font which may make the text easier to read for those with dyslexia or similar, however you may need to use the text size slider in this menu to ensure the text fits on-screen during the game.

There is also a full tutorial available from the main menu.

The trailer shows the PunderBash Games logo with the text "A PunderBash Games Production", followed by the content warning text which reads "This is a horror game and as such may contain content that some viewers may find disturbing".

This then fades out to reveal a pinboard style background, with a pair of posters on the left. The top one is of some sand and water with the word "Summer" in stylised writing, and underneath is a dark and bloody-looking poster with the word "Horrordays" in a different font. The posters are held up by red push pins.

In the centre of the screen is a large piece of paper with pins holding it up. The text on this paper fades in and reads "Relive the Summer holidays and go on a journey through 6 short stories spanning a single day." There are small postcard-like pictures beneath these words which change to various different postcards that remain on screen for a couple of seconds before changing. Some of these postcards have rips and/or blood splatter patterns on them.

The text changes to say "Take a peek through rose tinted glasses..." then as it shifts to the third line of text reading "...then rip away the curtain to see the monsters lurking beneath.", the background has a layer of dirt, grime, and blood fade in over the top of the pinboard.

To the right is a wooden style sign with the words "Live", "Laugh", and "Love" on them. These words randomly change to "Leave", "Loathe", and "Lie" throughout the scene.

The pinboard background then fades out to show the back of a postcard, with "Wish you were here" written at the top, an area for a stamp at the top right, and the words "for address only" above 3 lines on the right. On the left, the words "Don't forget to send us a postcard!" appear.

The postcard then changes to one with blood splatters on the edges, and the "Wish you were here line" at the top now says "Wish you were gone". The line on the right has also changed from "for address only" to "for a death only". On the left, the words "Have a nice trip..." appear.

The trailer ends with as the last postcard fades out to show the PunderBash Games logo once more, which then fades to black as the music stops.

Dang the twisted parts of the story was really nice, it blended so well with the happy little stories at first. And the art is quite endearing! It looks like a child slowly improving (I mean it positively!) and when the twist happens it looks... so wrong (in a good way). Great game with nice stories! I have to say my favorite one has to be the lovers one for some reason.

This game was awesome, i like how the stories changed on the horror side of things. The whole experience was fun and well put together.

Thank you very much! We're glad you enjoyed it :)

If you want, you can check my games!

I will take a look from my personal account ("Jenivere") over the next few days, as this account is for the Team's releases as we will be working on more projects together in the future :)
~Jen

Congrats on the release! Such a cool concept for a game. <3

Thank you! And thanks again for helping with the test reading for the stories, we really appreciate the insight to help with the editing.

i liked the concept but for technical issues i couldnt make a video of it for my channel ,,, dang it

What technical issues did you have with it? We can take a look at fixing it in an update.

oh no they were from my side like my recording gear didnt work properly :)

Ah ok, thanks for letting us know! That's a shame but we hope you enjoyed playing anyway :) 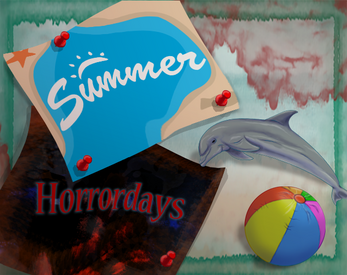